Emilio Aragón: “Hope is what keeps us alive. I remain convinced that there is a solution to hunger, and it is closer than we think.”

Fundación MAPFRE has today, on Wednesday 12 June in Madrid, presented their Social Outreach awards, the objective of which is to recognize the commitment, generosity and solidarity of those individuals and institutions carrying out important activities that benefit society in the scientific, cultural and social spheres. Her Majesty Queen Sofía presided over the ceremony.

During the awards ceremony, which was also attended by Nadia Calviño, minister for Economy and Business, Antonio Huertas, president of Fundación MAPFRE, emphasized that “we are a very fortunate generation” and that “we have the chance to build a better world together – a more humane, equitable and socially responsible world, if we use all our knowledge to bridge gaps instead of expanding them.” This knowledge, as he pointed out, “has made us more aware than ever of the need to redirect our development model toward more sustainable activities that respect people and their environments and which are fairer to future generations.”

The president of Fundación MAPFRE also mentioned that these awards are closely linked to sustainability and the United Nations’ Sustainable Development Goals, which MAPFRE has signed up to. “Now, more than ever, companies, and above all those whose reach extends furthest, as is the case with global groups, are called to action. Our primary objective is to expand and be profitable, but not at any cost. Without ethical conduct, we cannot do business, and socially responsible companies such as MAPFRE are well aware of this. Our values have become a hallmark of our company and something which is increasingly appreciated and recognized.” 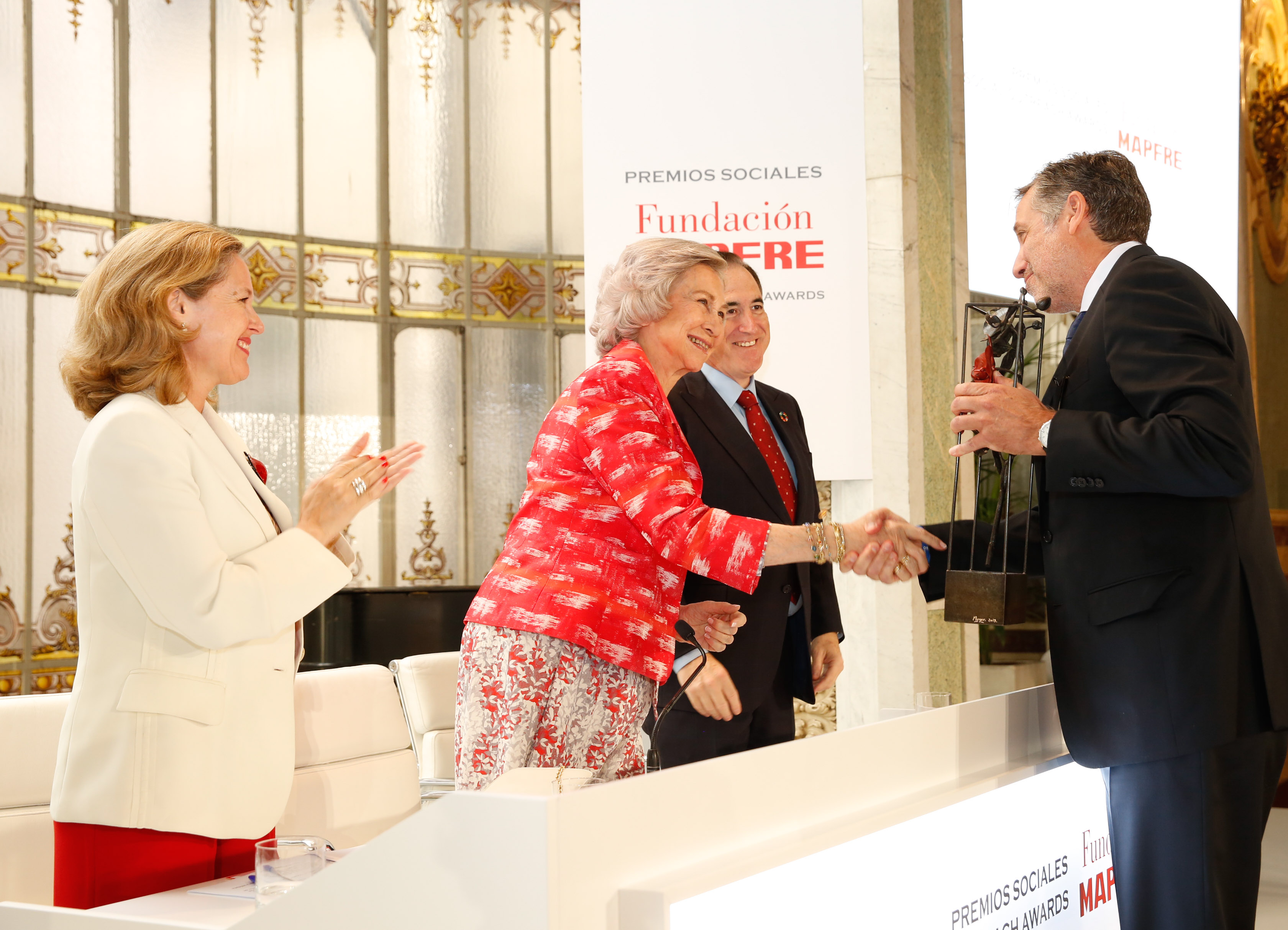 Emilio Aragón, José Manuel Martínez Lifetime Achievement Award, received this honor for his commitment to society, both professionally and personally. In his acceptance speech, Aragón (Havana, Cuba 1959), who defines himself as a “storyteller and musician”, stressed how honored he was to receive the award in the company of the other prizewinners: “We can find hope once again: faced with so much noise and disruption in our lives, there are people such as those who have today received a Fundación MAPFRE award who inspire us to quietly say that perhaps all is not lost.” He also offered optimistic figures on the fight against hunger. He pointed out that acute malnutrition has gone down by 10 percent and chronic undernourishment by 40 percent over the last 10 years. “Thanks to organizations such as Acción contra el Hambre, one in five undernourished children now has access to treatment based on ready-to-use therapeutic foods, a figure which has doubled over the last five years.”

Cirugía en Turkana was launched in 2004 by four general surgeons from the Ramón y Cajal Hospital in Madrid. In 2018 alone, they 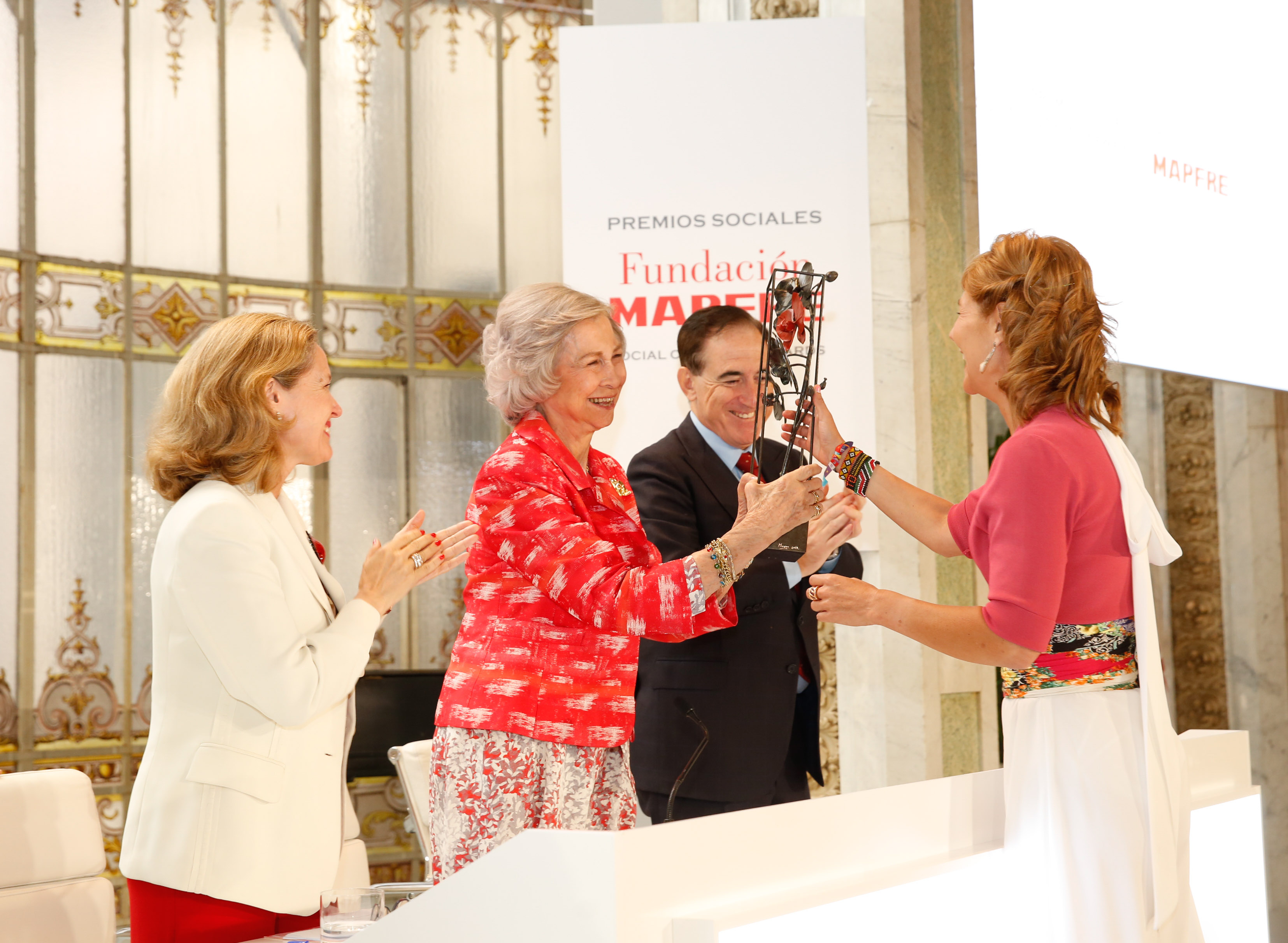 attended to 836 people and carried out 260 surgical procedures in one of the poorest regions on earth, located in northern Kenya, on the shores of Lake Turkana. Home to almost one million people, with an average life expectancy of 55 and an infant mortality rate of 22 percent, access to health care remains virtually impossible for the majority of the people living in the region.

The award was collected by Elena Mendía, one of the four surgeons who launched the first campaign 15 years ago, and who spoke with special fondness about the Turkana women. “These women, as is the case around the world, are the cornerstones of society, they are the ones ensuring that things run smoothly. They take care of their children, they feed them, they give birth while still being only children themselves, and they are also the ones who, in desperation, have to watch them die. Their weapons are their determination, their self-denial, the sacrifices they make, their love for their children and their calm resignation when faced with setbacks. This is why we go to Africa every year. We go there to give them what we have and they do not: health, by means of our surgical procedures.”

“WHAT IS YOUR ONE WISH IN LIFE?” THE WORDS THAT CHANGED EVERYTHING 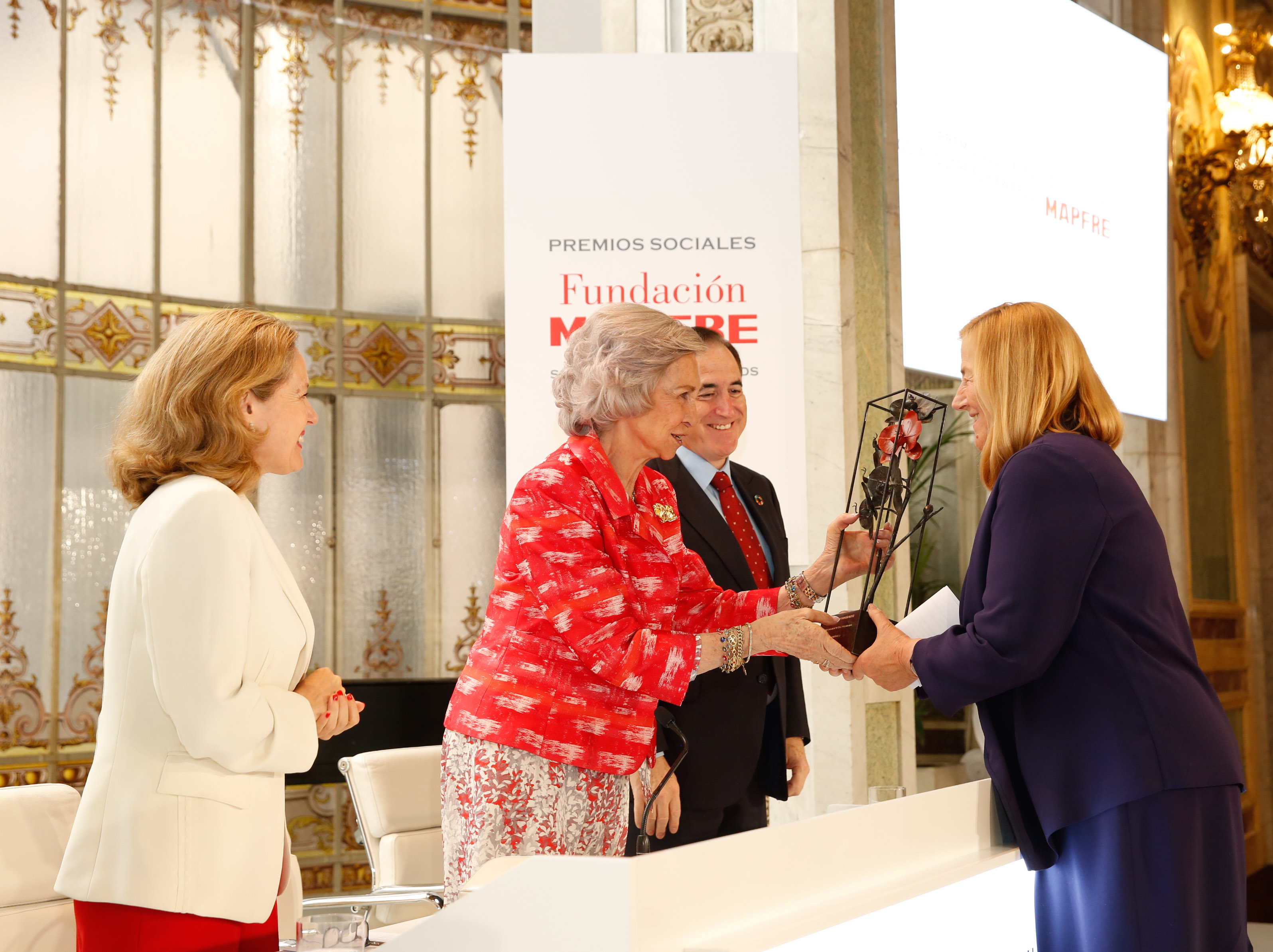 Fundación MAPFRE also recognized the work of Mary’s Meals, an international organization founded by Magnus MacFarlane-Barrow (Argyll, Scotland 1968), in 2002, which received the Award for the Organization with the Best Track Record in Social Causes. This award was collected by Elisalex Löwenstein, president of the organization in Spain, who talked about the origins of the project. “Magnus visited Malawi, which had gone through a tremendous famine. He was accompanying a priest who was visiting a dying mother in her hut, surrounded by her six children. He began talking to her eldest child, Edward, and asked him what his one wish in life was. With large and sad eyes, the boy told him that he wanted to have enough to eat and to go to school one day”, words which, according to Elisalex, changed everything. During her speech, she also emphasized the important work of the women who volunteer to do the cooking in the 18 countries where their organization is active. “The work of these women is immense and absolutely essential. They leave home in the early morning, before the sun rises, they walk for one or two hours, they fetch water from the pump, they cook in huge pots and they sing, laugh and dance. They are happy. The classrooms fill up, drop-out rates go down, grades go up and everyone’s health improves. These children are absolutely desperate to study.”

Mary’s Meals currently feeds 1,425,013 children from Africa, Asia, Latin America, Eastern Europe and the Caribbean in their school canteens. The organization follows a highly efficient working model that guarantees education and nutrition in some of the poorest and most needy parts of the planet.

AGRINDUS, one of Brazil’s largest milk producers, which stands out for its revolutionary milk production and marketing, all the while 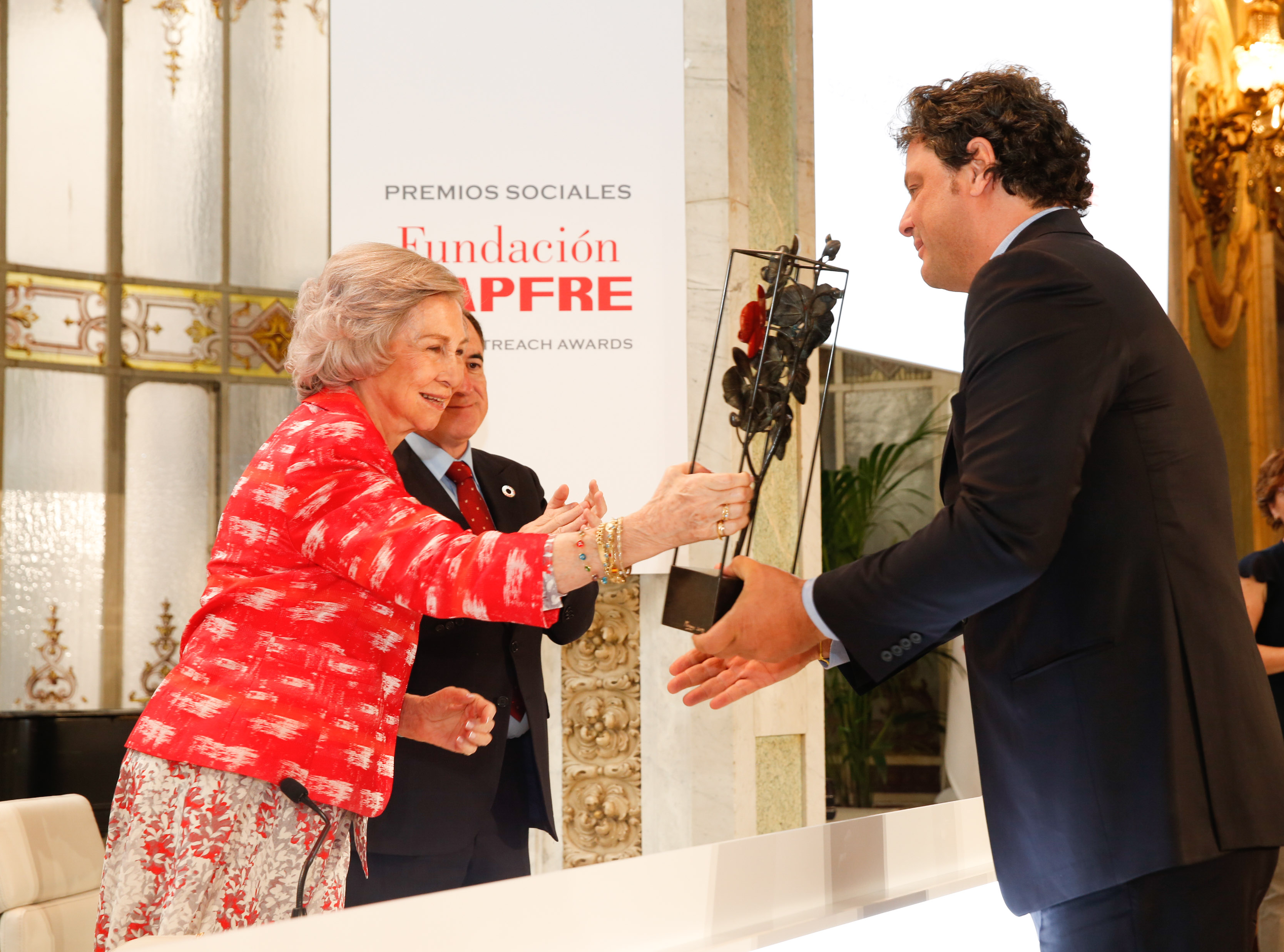 following a policy of low environmental impact and concern for animal welfare, has received the Award for the Best Agricultural Initiative.

Roberto Jank, head of the organization, highlighted the importance of this award, which not only recognized their innovative production system for easily-digestible milk designed for people who have a certain level of intolerance to cow’s milk, but also the fact that they guarantee clients are consuming “high quality and natural products”, that their cows “receive the best care possible”, and that they promote environmental sustainability” across all the project’s activities. In the last 50 years, AGRINDUS has been instrumental in generating employment, preventing rural depopulation and improving society, through regular donations of their products to local shelters and childcare centers, as well as to the Food Bank in the city of São Paulo. “We currently produce foodstuffs for 300,000 Brazilians a day and we make efficient use of our resources”, explained Jank.